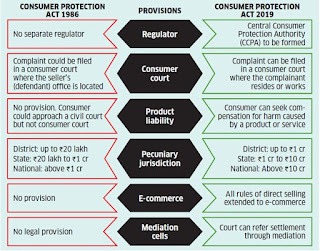 The Consumer Protection Act, which received President’s assent in August 2019, came into force on July 20, 2020.
It seeks to safeguard consumer rights from unfair trade practices and misleading advertisements.
The Act fixes the liability on endorsers, given that there have been numerous instances in the recent past where consumers have fallen prey to unfair practices, being influenced by the ‘star value’ of the brand ambassadors.
Now on, endorsers will have to verify the veracity of the ad claims before promoting it.
Any false or misleading advertisement will attract a minimum penalty of Rs 10 lakh and a one-year imprisonment and a maximum of Rs 50 lakh and up to five years’ imprisonment.
A celebrity who is part of any misleading advertisement may also be banned from endorsing any products/services up to one year, which can be extended to three years.
Has any celebrity landed in trouble?
Amitabh Bachchan, Madhuri Dixit and Preity Zinta have landed in trouble in the past over misleading advertisements.
They were associated with Nestle's Maggi and many legal cases were filed against them after reports surfaced that the noodles contain Monosodium glutamate (MSG), an additive that enhances the flavour of food, and lead.
In 2012, an FIR was filed against actress Genelia D'Souza on charges of cheating customers through a real-estate venture called Anjaniputra. She was its brand ambassador. Many customers said they booked the flats as the actress was associated with the company.
In her defence, D'Souza said that she was not the company's brand ambassador but had only done a one-day shoot for the company.
In the Amrapali Group controversy, MS Dhoni had landed in trouble. Experts say that Dhoni, being the face of the brand, did attract many buyers. He was the company's brand ambassador for six years but stepped down after the controversy came to the fore.
So, what can celebrities do to stay out of trouble?
A celebrity will have to increase due diligence before he or she takes on an endorsement (product details/product quality/quality compliance).
Plus, they will need to make higher indemnity provisions in the endorsement contracts so as to mitigate any future liability. This may lead to increased endorsement fee.
High risk will mean higher cost
According to Sandeep Goyal, Chief Mentor, IIHB (Indian Institute of Human Brands), endorsements will now cost more. “If risks have gone up for the celebrities, they will want to be compensated. Mere indemnities may not be enough.”
While celebrities will have to be careful, Section 21 of the Consumer Protection Act, which deals with the use of an ‘endorser’ in advertising, still has not been notified to be enforced.
While the provision is part of the Act, it is still not an enforceable law. So, for now, it gives a breather to clients, agencies and endorsers.
While many are supporting move to hold endorsers liable, Meet Malhotra, Senior Advocate, thinks otherwise.
“While the government is attempting to hold endorsers accountable, the quantum of penalties proposed are meagre compared to what most high-profile endorsers would charge for endorsing a product and may not draw the desired result. Endorsers may insure themselves against such penalties or take indemnities from the product manufacturer or service provider. Further, an escape window of due diligence has been given," he said.
Malhotra may not be wrong about the penalties on endorsers being meagre. Celebrity endorsers like Virat Kohli reportedly charge between Rs 5 crore- Rs 5.5 crore a day for endorsements.