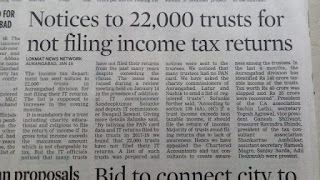 Taxation of religious and charitable trusts 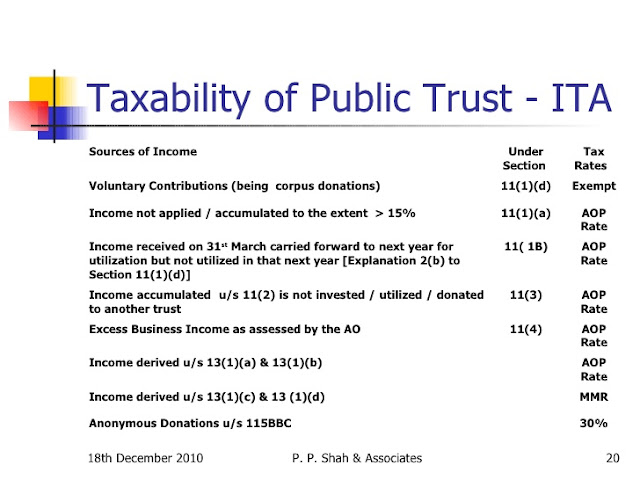 Special provisions for religious and charitable trusts
Trust registration under Income Tax Act 1961
i. The newly introduced provisions of section 12AA of the Act provides for a procedure to be followed for grant of registration to a trust or institution.
ii. According to which, the person in receipt of the income should make an application in Form No. 10A for registration of the trust or institution to the Commissioner before the expiry of a period of one year from the date of the creation of the trust or the establishment of institution, whichever is later.
iii. However, where an application for registration is made after the expiry of the aforesaid period, the provisions of sections 11 and 12 will apply from the date of the creation of the trust or the establishment of the institution if the Commissioner is, for reasons to be recorded in writing, is satisfied that the person in receipt of the income was prevented from making the application within the aforesaid period for sufficient reasons. If the Commissioner is not so satisfied, the provisions of section 11 and 12 will apply from 1st day of the financial year in which the application is made.
iv. Along with Form no. 10A (in duplicate), file the original (or certified copy of) Trust Deed, together with one copy thereof, under which the trust is set up (original copy of the deed if filed shall be returned).
v. Two copies of accounts (i.e. Balance Sheet, income & Expenditure A/C., and Receipts & Payment A/c.) for the years, prior to the financial year in which application is made, are also to be filed along with application (if applicable). It should be noted that here, only the copies of accounts of the trust since its inception or during the last three years, whichever is less, are required to be filled.
vi. The Commissioner shall call for documents and information and hold enquiries regarding the genuineness of the Trust or Institution. After he is satisfied about the charitable or religious nature of the objects and genuineness of the activities of the trust or institution, he will pass an order granting registration and if he is not so satisfied, he will pass an order refusing registration subject to the condition that an opportunity of being heard shall be provided to the applicant before an order of refusal to grant registration is passed by the Chief Commissioner or Commissioner and the reasons for refusal of registration shall be mentioned in such order.
vii. With effect from June 01, 1999, an order on an application for registration of a trust or institution is to be made by the Commissioner only and not by the Chief Commissioner. However, in case trust falls under the jurisdiction of an income tax authority having its headquarters at Mumbai, Chennai, Kolkata or Delhi, the application is to be made to the Director of Income Tax (Exemptions).
viii. The order granting or refusing registration has to be passed within six months from the end of the month in which the application for registration is received by the Commissioner and a copy of such order shall be sent to all the applicants. The order is effective until withdrawn.
ix. It is also provided that the grant of registration shall be one of the conditions for grant of income-tax exemption u/s. 11 & 12 of the Income Tax Act, 1961.
x. The Taxation Laws (Amendment) Act, 2006 has modified conditions as to registration of trust by amending section 12A providing that the accounts of the trust or institution for that year should be audited by a chartered accountant where the total income of the trust or institution as computed under this Act without giving effect to the provisions of section 11 and 12 exceeds the maximum amount which is not chargeable to income-tax in any previous year and such audit report is furnished along with the return of income for the relevant assessment year with effect from the 1st day of April, 2006.

Taxation of Trusts ( other than exempt)

The taxability of the Trust depends upon the type of the trust. In the case of a non-discretionary trust, all income is taxable in the hands of the beneficiaries.  On the other hand, in the case of a discretionary trust, in which the shares of the beneficiaries are unknown and indeterminate, it is taxed in the hands of trust at the maximum marginal rate. 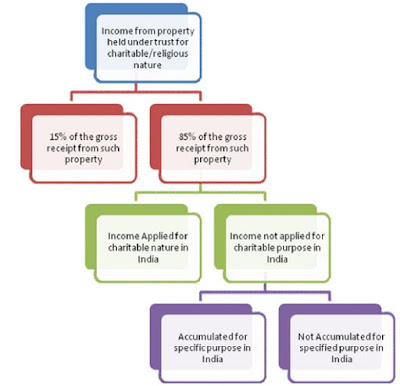 The income tax Act prescribes a specific mode for calculation of income and taxability in the case of  Association of Persons.
Let's first discuss what is an Association of Persons.
An association of persons means an association in which two or more persons join in a common purpose or common action. The term person includes any company or association or body of individuals, whether incorporated or not. An association of persons may have companies, firms, joint families as its members – M.M Ipoh v CIT [1968] 67 ITR 106(SC).
Now lets see how income of Association of Persons (AoP)/ Body of Individuals(BoI) is determined.
Computation of Income of AoP
The total income under the different heads i.e. Income from house property, Profits or gains of business or profession, Capital gains, and income from other sources shall be worked out  ignoring incomes exempt under Sections 10 to 13A.
From this make adjustments for the following:
i. If salary, commission, bonus or remuneration is paid by AoP/BoI to members, it will be added back. It may be noted that remuneration paid for actual services is also disallowed. This is due to the express provision in Section 40(ba).
ii. If interest is paid by AoP/BoI to members, it will be added back. But the following should be kept in mind:
Additional points to be kept in mind while disallowing interest:
Where interest is paid by an AoP/BoI to any member who has also paid interest to the AoP/BoI, the amount of interest to be disallowed shall be limited to the amount by which the payment of interest by the AoP/BoI to the member exceeds the payment of interest by the member to AoP/BoI. 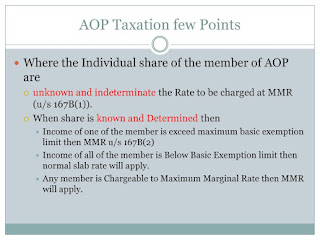 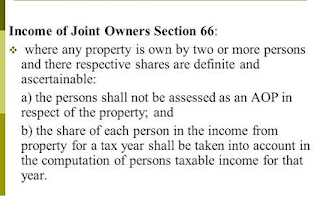 Taxation of partnership firm and its partners

Profits can't be taxed in the hands of partners even if profits are not taxed in the hands of firm due to exemption
Where income chargeable to tax for a firm was nil due to certain deductions and exemptions, some assessing officers levied tax on the profit credited to its partners. This led to disputes and some taxpayers challenged this in courts.


“After looking into the issue, the Central Board of Direct Taxes (CBDT) has decided to clarify that such income in the hands of partners will be completely exempt,” said a senior finance ministry official.

The official said the partners that had already paid taxes on such income might be allowed to get refunds or adjustments against their future tax liability (but there are only a few such cases).

The move came after CBDT received representations in connections with interpretation of provisions of Section 10 (2A) of the Income-Tax Act. According to this section, inserted by the Finance Act, 1992, a tax partner is not liable to tax again on his share in the total income of the firm.

“The position is clear but the language of the section in the law created difficulty... The ambiguity will be cleared with this clarification. It will certainly provide a lot of relief to promoter companies and others from the consequences of unintended taxation,” said Deloitte Partner N C Hegde.

The profit of a partnership firm is divided among its partners in sync with their partnership deal. For the purpose of computation of income tax, identities of a partner and the firm are co-terminus. This means assets and liabilities are not different. The profits are credited to a partner’s account and he can plough it back into the business. It is more of a book entry, as no cash is generally drawn out of the company. Therefore, the income of partners was made tax exempt in 1993 to avoid double taxation.

As some assessing officers interpreted the section differently and started levying taxes on partners’ profits, clarifications were sought as to what amount would be exempt in the hands of partners in cases where a firm had claimed exemptions or deductions. The firm is taxed at 30 per cent plus surcharge and applicable tax and the partners’ profit is also taxed at the same rate.

However, partners’s interest income from capital in account and the remuneration they receive from the company will continue to be taxable according to the provisions of the I-T Act.Summary

The law in case of partnership taxation A partner is not liable to be taxed again on its share in a partnership company. Since the income of the firm is already chargeable to tax, taxing again in the hands of partners could lead to double taxation

The clarification CBDT will clarify that the entire profit credited to partners’ accounts in a firm will be exempt from tax, even if the firm’s taxable income becomes nil on account of exemptions
Email ThisBlogThis!Share to TwitterShare to FacebookShare to Pinterest
Labels: Income Tax
Newer Post Older Post Home