Unveiling the policy, Commerce Minister Nirmala Sitharaman said the new policy would boost exports and create jobs while supporting the Centre’s 'Make In India' and 'Digital India' programmes. “Export obligation under the export promotion capital goods scheme will be reduced by 25% to promote domestic manufacturing."
FTP would focus on defence, pharma, environment-friendly products and value-added exports, she said, adding: “The govt will continue to incentivise units located in special economic zones... With a focus on employment-creating sectors, the government will promote e-commerce."

Later in a series of tweets, Sitharaman said the latest FTP was introducing two new schemes — "Merchandise Exports from India Scheme (MEIS) and "Services Exports from India Scheme (SEIS). Under MEIS, a higher level of support would be provided to processed and packaged agricultural and food items. And, agricultural and village industry products would be supported across the globe at the rates of 3% and 5%.

> Business services, hotel and restaurants to get rewards scrips under SEIS at 3% and other specified services at 5%.

> Duty credit scrips to be freely transferable and usable for payment of customs duty, excise duty and service tax.

> Debits against scrips would be eligible for CENVAT credit or drawback also.

> The criteria for export performance for recognition of status holder have been changed from Rupees to US dollar earnings.
> Manufacturers who are also status holders will be enabled to self-certify their manufactured goods as originating from India.

> Inter-ministerial consultations to be held online for issue of various licences.

> Vishakhapatnam and Bhimavarm added as Towns of Export Excellence.

> Certificate from independent chartered engineer for redemption of EPCG authorisation no longe ..

Application to Software Technology Parks of India (STPI) has to be made to set up a 100% Export Oriented Unit (EOU).

Documents to include:
1.     Application Form in the prescribed form.
2.     Memorandum and Article of Association.
3.     Board Resolution for setting up STP Unit and persons authorized to sign and submit the application form.
4.     Resume of person heading the operation/CEO.
5.     Detailed project report/ Business plan consist of:
a.     Company profile.
b.     Promoters background.
c.     Units Area of expertise/Services offered.
d.     Marketing Strategy / marketing Arrangements.
e.     Manpower plan.
f.      Future plans.
g.     Brief write up on the parent Company and the activities proposed to be carried out by the Indian entity. (In case foreign equity participation)
h.     List of Capital goods proposed to be procured from abroad and within India.
i.      Details of foreign collaborator (whether financial or technical)
j.      Copy of floor plan of the Unit certified by an architect.
k.     Copy of the rent agreement if any.
l.      Copy of invoice of the Internet service provider.
6.     Financials statement like.
a.     Cost of project & Means of finance.
b.     Projected P&L A?C.
c.     Projected Balance Sheet.
d.     Projected Cash flow/fund flow statement.
e.     Export workings- (As per Transfer Pricing guidelines where ever applicable)
f.      Financials for a 5 year period projecting income from operations, Capital expenditure & cash Flows.
g.     Detail for aggregate foreign exchange comings & outgo for first 5 years.
h.     Detail for estimated numbers of employees and wage bill for first 5 years.
7.     Other documents like
a.     Copy of service agreement signed with parent company / clients/ PO with clients/ Master service Agreement.
8.     Initial application processing fee of INR 2,500
Advances services charges of INR 50,000 at the time of executing the legal agreement. Service to be paid annually as per the following slabs.

Annual charges for 3 years are payable in advance. At the time of signing the Legal undertaking, the unit is required to pay additional fees as per the turnover achieved if achieved if achieved turnover in more than the projected turnover. Note: Once the legal agreement has been executed then a request letter has to be sent to the STPI for issue of the Green Card.

ANNUAL RETURN TO BE FILED WITH STPI 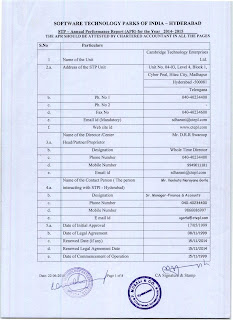 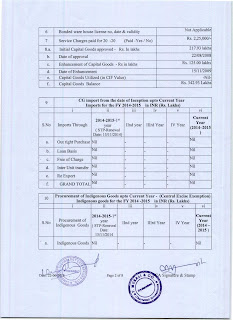 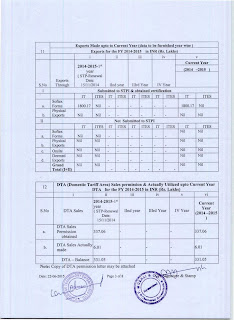 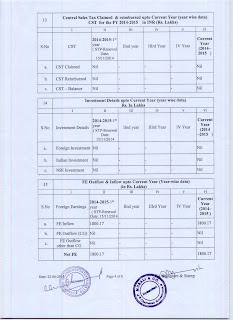 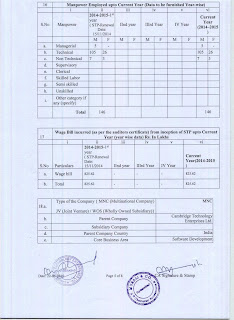 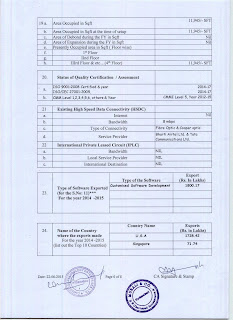 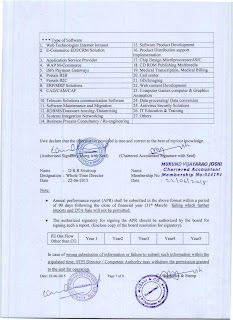 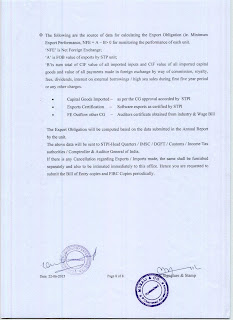 The mismanagement of SEZ approvals leading to a country of nearly thousand SEZs ..an example of a good policy and bad execution reflecting the Indian State

In India Special Economic Zones are setup with the main objectives to generate additional economic activity, promote export of goods and services, promote investment from domestic and foreign sources, create employment opportunities, develop infrastructure facilities and backward regions, attract Foreign Direct Investment (FDI), earn foreign exchange and contribute to exchange rate stability, single window clearance for setting up of a SEZ and an unit in SEZ , stimulate sectors such as electronics, information technology, create backward & forward linkages to increase the output and raise the standard of local enterprise that supply goods and services to the zone.

Th e impact of Chinese SEZs in propelling China’s exportled growth has been impressive, with the SEZs now account for 12% of the country’s GDP.

India’s experience with SEZs actually predates that of China. In 1965 the fi rst Special Export Processing Zone was set up in Kandla in Gujarat state, seven more later began operations. Th e Indian SEZ model, however, has been far less successful than the Chinese model. The Indian zones have had difficulty in attracting foreign and domestic investors for a variety of reasons. An important diff erence has been the lack of a natural gateway that could serve as a source of capital and a conduit for the movement of goods in the manner that Hong Kong and Taiwan function for China

By establishing Special Economic Zones, we are trying to make India, a global manufacturing and out sourcing hub. In a country like India where the problem of unemployment is serious, SEZ is to create more employment in the country particularly to educated people. Th e Special Economic Zones policy, based on private sector financing and aimed at creating both industrial and social infrastructure is clearly an important step in this direction and deserves the incentives that are given to SEZ. But, at the same time this employment is expected to outweigh the large revenue losses and large scale displacement of farmers The recent global economic crisis has most certainly hit exports and foreign investment fl ows and will have affect on the prospects of SEZs. Th e lack of economic activity in most SEZs leads to the suspicion that many promoters were incapable of attracting economic production units to their SEZs in the fi rst place, and were merely betting on them as real estate assets and relying on loopholes in the law to realize their value at a later date. As on 2nd June, 2009, formal approval was given to 568 SEZs whereas only 315 SEZs were notifi ed as on the same date. Out of 568 formal approvals, majority of them (61%) are IT/ITES SEZs. With the outsourcing boom in western countries getting negative trend and Manila being strong competitive hub for outsourcing activities, IT/ITES SEZ units may not kick-off as expected. All in all, recent economic recession is likely to persist at least for the next two years, which will also create dent in FDI in manufacturing and IT/ITES services as well for export. It is very clear that there are too many SEZs, particularly for IT/ITES, without any business.

Owing to economic slowdown and availability funds being tight in the capital market, one of the leading developers put on hold 12 SEZs in December 2008.Since most of the SEZs are concentrated in few States for e.g. Andhra Pradesh and Maharashtra having maximum number of SEZs. The unhealthy competition among other States led to mushrooming of SEZ development units and

turned into uproar by community with lot of discontent and violence against land acquisition, compensation packages for displaced farmers, changes in rehabilitation, resettlement etc..

With so many complications involved, will this SEZ concept finally achieve the intent with which they have started in India? If so, to what extent? What kind of a development goal this will achieve or will it pass on more wealth into private hands? Is the administration prepared for the huge backlash of discontent, protest and social upheaval that oppression on such large scale could trigger like the recent Nandigram (West Bengal) and Raigad (Maharastra)?

These questions are not going to be easy to answer rather a real challenge to make the SEZ concept successful. Th e controversies against SEZ started where Ministry of Finance feels that tax rebate and tax incentives would result in huge losses from direct and indirect taxes. According to sources the country would be losing Rs.1, 60,000 Crores on account of SEZ granted tax rebate by 2010, which is not a small amount. On the other hand Ministry of Commerce and Industry, is canvassing for SEZ, in order to make our industries more competitive in the global economy. This is creating discrimination between units within the same locality one being Non-SEZ area the other next to it in SEZ area. At this time of high fiscal deficit of the country is rising (Rs.3, 32,535 Crores budgeted fi scal deficit in the union budget 2009-10) is it justified that offering tax concession to SEZ units?

Another factor is the way in which SEZs are structured and designed in India. The Indian variants tend to be smaller than their Chinese equivalents, sector focused (in such sectors as handicraft s, leather products, auto parts, apparel, electronics and IT services, gems and jewellery, food processing) and separated from their surrounding communities. Chinese SEZs are large, multi-sector and no longer have formal boundaries separating them from surrounding communities. These points up another difference between the Chinese and Indian approaches: in China the SEZs have been used to test reforms that have subsequently been adopted nationwide, with the result that today there is very little diff erence in policies within the SEZs and the general economy. In India, on the other hand, reform generally has moved ahead much slower and the SEZs have not been seen as the leading edge of reforms.

Th e 100% Export Oriented Units (EOUs) are finding it tough with the advent of the SEZ Act, as SEZs enjoy more benefi ts than EOUs , resulting in an uneven level playing field when the overarching objective of both remains to achieve higher export growth The choice of place for setting up SEZs in India is not fully supported by the economic factors envisaged by Hirschman. Thereby weaknesses listed above made the SEZs non-constructive in many places. Due to the recent global recession and slow down in the economy IT, ITES and BFSI focused BPO SEZs become defunct. Hence, it can be concluded that SEZs in India are not fully successful in achieving their objectives for which they were established and the cost of establishing the SEZs in terms of social cost is very high.

1.Almost 568 SEZs were given formal approval spread across all over the country whereas in china Only seven zones selected very big in size and specifi ed areas.

5. SEZs in India largely governed by SEZ Act, only local laws like VAT are in the hands of State Governments, while in china Powers to provinces and local authorities to frame additional guidelines in administering the zones

6. Focus was more on service sector like IT and ITeS whereas in china focus was more on manufacturing sector
Email ThisBlogThis!Share to TwitterShare to FacebookShare to Pinterest
Labels: Corporate Finance, Economics, International Business
Newer Post Older Post Home