Who is an entrepreneur ? Are you going to be an enterprenuer anytime soon. Is it your cup of tea. Checkout the clues which foretell the possibility based on your traits

What's an Entrepreneur? The Best Answer Ever

Entrepreneurship is the pursuit of opportunity without regard to resources currently controlled.

I talked to Stevenson about this classic definition this weekend. Back in 1983, he told me, people tended to define entrepreneurship almost as a personality disorder, a kind of risk addiction. "But that didn't fit the entrepreneurs I knew," he said. "I never met an entrepreneur who got up in the morning saying 'Where's the most risk in today's economy, and how can I get some? Most entrepreneurs I know are looking to lay risk off—on investors, partners, lenders, and anyone else." As for personality, he said, "The entrepreneurs I know are all different types. They're as likely to be wallflowers as to be the wild man of Borneo."
By focusing on entrepreneurship as a process, his definition opened the term to all kinds of people. Plus, it matched the one demographic fact HBS researchers already knew about entrepreneurs—they were more likely to start out poor than rich. "They see an opportunity and don't feel constrained from pursuing it because they lack resources," says Stevenson. "They're used to making do without resources."
The perception of opportunity in the absence of resources helps explain much of what differentiates entrepreneurial leadership from that of corporate administrators: the emphasis on team rather than hierarchy, fast decisions rather than deliberation, and equity rather than cash compensation.
What would you expect, asks Stevenson: When you don't have the cash to boss people around, like in a corporation, you have to create a more horizontal organization. "You hire people who want what you have and not what you don't have," Stevenson says. In other words, entrepreneurs offer their team members a larger share of a vision for a future payoff, rather than a smaller share of the meager resources at hand. Opportunity is the only real resource you have.
Or, as Burgstone puts it:

Every time you want to make any important decision, there are two possible courses of action. You can look at the array of choices that present themselves, pick the best available option and try to make it fit. Or, you can do what the true entrepreneur does: Figure out the best conceivable option and then make it available.

And that, folks, is what makes entrepreneurship so friggin' hard. And so friggin' necessary.

Who will not Like to be a Enterprenuer !? But is it your cup of Tea

The flashy cars. The fancy watches. Flats in Paris or with views of the ocean. Flying first class anywhere they want to go.
The life of an entrepreneur can look pretty sweet.
People are fascinated with the material rewards and the freedom that can come with starting a business. It looks like an easier route to a better lifestyle than the career path they might currently be on.
And it’s true that these days, anyone can start a business. The Internet has broken down so many barriers to entrepreneurship, making it relatively simple and inexpensive to hang out your digital shingle so to speak and get started.
But it’s a long way from registering a web site to a location independent lifestyle or a six figure paycheck. Anyone can start a business, but it takes a certain type to turn it into success. 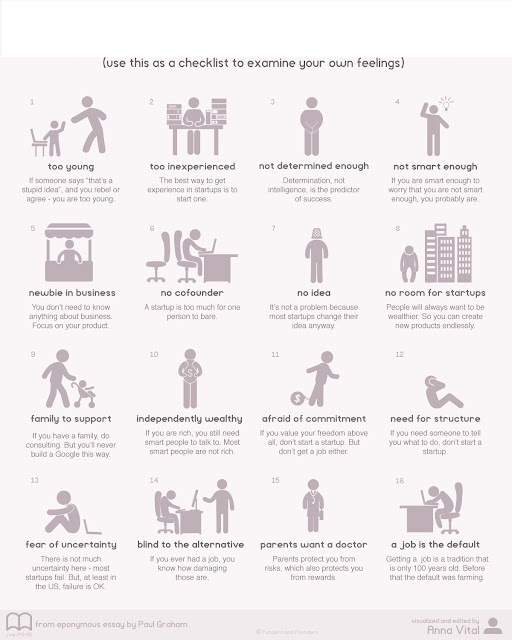 If you’ve been thinking about trying your hand at starting your own business, ask yourself these questions first:

Are you confident that you are (or can become) the best at what you do?

Being great at what you do is important in any niche, but being confident is almost more important. Successful entrepreneurs are, almost by default, confident in their abilities both to deliver their product or service, but also in their ability to make their business idea work.

How do you feel about networking?

I don’t necessarily mean passing out business cards at your local chamber of commerce meeting, but that might be required as well. Entrepreneurs tend to understand how to make connections — both for their own use and to help others. Becoming a connector is a huge plus when it comes to starting a business.

How essential is a steady paycheck?

When starting a business, any paycheck — let alone a steady one — is not a given. People who start successful businesses tend to be willing to work for free — or for trade or for perks — at first, because they are so passionate about their idea or product. If you’re not in a position to do that, even for a short time, chucking it all in to start a business is probably not for you. It’s true that you could see exceptional rewards from starting a small business, but it’s likely not to happen right away; you need to be ready and willing to make some sacrifices up front. That might mean you start your business on the side of your full-time job, or that you live off your savings for a while. This Dave Ramsey quote applies: “If you will live like no one else, later you can live like no one else.”

How do you feel about risk and uncertainty?

If you can’t handle feeling uncomfortable, entrepreneurship is probably not for you. The most successful business owners practice feeling uncomfortable on an almost daily basis. Growth happens well outside our comfort zones, and when starting a business, you will be pushed to do something new nearly every day. Most people prefer some level of certainty over a roller coaster ride, but if you can’t push through that discomfort, you won’t be able to reach true success.

Do you get stage fright?

You may or may not be required to stand onstage in front of a huge audience, but as the CEO of a business, you will almost certainly be required to present to investors or clients, speak to potential partners, and even address employees. If being in the spotlight is anathema to you, you might need to reconsider your desire to be an entrepreneur. You don’t have to love it, but you do have to be able to overcome any stage fright you might have when the moment calls for it.

Are you willing to work days, nights and weekends?

There’s the wonderful image of the “work from wherever” lifestyle with Instagram selfies of entrepreneurs working on the beaches of the Bahamas or from the balcony of a Paris flat. But the part people tend to forget is the “work” portion of that equation. Location independent lifestyles don’t mean less work — in fact, being able to work from anywhere means you often do. So, if you’re a big fan of bank holidays or long vacations you might need to rethink your entrepreneurial plans. Micro-businesses that are one-man or one-woman organizations make it especially difficult to take time off or have a proper vacation. It’s not impossible, but it’s not likely in the first few years.

This may seem like a silly question in a post about entrepreneurship, but there are some who thrive on being in charge and others who would rather… not. There’s nothing wrong with either, but an entrepreneur needs to be ready to be the boss. If having the buck start with you isn’t your idea of a dream job, you might reconsider your career goals.
It’s not to say that an introvert who prefers the sure thing over taking a risk can’t be a successful entrepreneur, but it will be much harder. But if you do naturally have some or all of these personality traits — combined with a product or service that truly solves a problem for people — you can probably go far.