FATCA -Declaring Non -US income of US Tax payers

What is the significance of FATCA to an NRI living in USA?

Any NRI living in USA and investing in Indian assets will have to adhere to the Foreign Account Tax Compliance Act (FATCA) laws. These legislations require financial institutions to declare details of accounts held by US taxpayers. FATCA also requires a self-declaration from NRIs living in the USA while making investments in India. If you are an NRI who lives in USA, find out which investments need FATCA compliance in India.

All NRIs must adhere to global tax compliance systems for their offshore accounts. One of the most important set of rules is outlined within the Foreign Account Tax Compliance Act or FATCA for NRIs living in USA.

FATCA or Foreign Account Tax Compliance Act is a tax law endorsed by the US government in 2010 as part of the Hiring Incentive to Restore Employment (HIRE) Act1. The Act requires certain international financial institutions2 to report details of financial accounts held by US taxpayers to the Internal Revenue Service (IRS). These institutions are also required to report instances of tax evasion. A financial institution is empowered to withhold tax if an individual does not comply with any document requirements.

In short, FATCA aims to bring in transparency and curb tax evasion by monitoring the income earned by NRIs living in USA from their non-US investments and assets.

The Inter-Governmental Agreement (IGA) with USA for implementation of FATCA entered into force on 31st August 2015. Under the alternative procedure provided in Rule 114H(8) of the Income Tax Rules, 1962, the financial institutions need to obtain the self-certification and carry out due diligence procedure to determine the reasonableness of the self-certification in respect of all individual and entity accounts opened from 1st July 2014 to 31st August 2015. Such self-certification and documentation is required to be obtained by the financial institutions by 31st August 2016, otherwise they are required to close the account and report the same if found to be a “reportable account” as per the prescribed due diligence procedure for pre-existing account.

To whom does FATCA apply?

According to FATCA, everyone living in the USA is subject to this tax law. These include:

Let’s look at a detailed list of investments and assets to see if they fall under FATCA’s purview:3

Indian investments that are subject to reporting and taxation in the US include fixed deposits, public provident fund, stocks, mutual funds, bank interest, other capital gains and retirement contributions.

House properties owned by NRIs in India do not fall under specified assets of FATCA. This means income earned from them is not subject to FATCA. However, this income is subject to taxation in India.

NRE, NRO and FCNR accounts held by NRIs come under the purview of FATCA.

Not covered by FATCA

Assets that do not come under the FATCA lens include antiques, jewellery, cars, art pieces and other collectables. Safety deposit boxes do not require to be reported. Foreign currency held by you but not in any financial institution also does not need to be reported under FATCA.

Difference between FATCA and CRS 4

Buoyed by the success of FATCA, the Organisation of Economic Cooperation and Development (OECD) introduced the CRS or Common Standard on Reporting and Due Diligence for Financial Account Information. The CRS was based on similar regulations as the FATCA, but there are notable differences between the two. While both legislations were introduced to combat tax evasion, CRS has a more considerable breadth of design. It covers 90 countries except the US. Reporting of all financial accounts is mandatory under the CRS, while it is not compulsory for FATCA. FATCA concerns only people living in the USA and has a limit that exempts US taxpayers with an aggregate value of foreign financial assets less than $50,000.  CRS does not have any such exemptions.

Non-compliance with FATCA norms in India can lead to freezing of bank accounts, suspension of mutual fund investments and blocking of PPF or NPS accounts.

Final Note: FATCA is a concentrated effort to fight tax evasion in the US. NRIs may earn income from foreign assets but they should definitely declare them. So if you are an NRI in the USA, please remember to comply with FATCA rules before investing in assets in India.

The Act prohibits bribery of foreign officials and intends to deter corruption and abuses of power worldwide. The FCPA contains policies for governing the actions of publicly traded companies, their directors, officers, shareholders, agents, and employees. This includes working through third parties such as consultants and partners in a joint venture (JV) with the company—meaning that the use of proxies to execute a bribe will not shield the company or individual from culpability.

This section of the Act outlines the accounting transparency guidelines that are meant to operate in tandem with the anti-bribery provisions. The FCPA requires companies whose securities are listed in the U.S. to meet its accounting provisions, which cite ways of recording assets that make it difficult to mask corrupt payments. Corporations covered by the Act also must devise and maintain internal controls to assure regulators that their business transactions are accounted for properly. 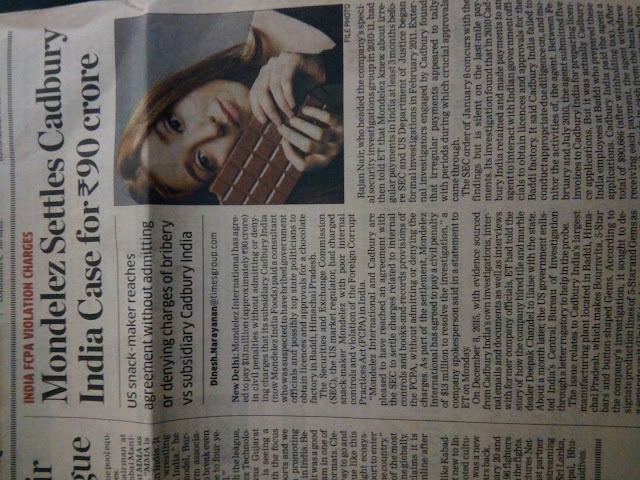