It can be safely estimated that the need for introduction of the Independent Directors Rules is the result of various corporate governance lapses and fiascos. This is likely to weed out the practice of appointing (distant) relatives and (at times) friends and domestic help as independent directors. This is expected to infuse some sanity in the entire process and the uphold the very objective of having independent directors in the first place. Apparently, similar provisions are prevalent in few other Western countries.

Most of the companies select an individual for appointment as an independent director on the basis of his/her skill and competencies in the sector in which such company operates, market credibility and required experience in such sector. Apart from this, the companies would also have to find an additional attribute (i.e. clearing the online proficiency self-assessment test) in the prospective Independent Director, which may prove to be a steep target. Needless to add, the exemptions provided in the Independent Directors Rules provides for some breather and which can be seen as a 'ray of hope' for some. The requirement i.e. online proficiency self-assessment test may be perceived as an additional burden by the Companies as well as the prospective Independent Directors in the entire process and add to that the high clearing benchmark of 60 percent grades in such online proficiency self-assessment test. 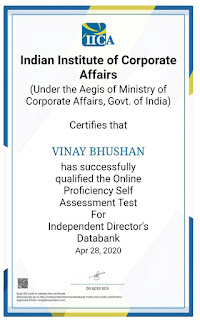 The appointment, re-appointment, and removal of independent directors shall be through a special resolution, which requires 75 per cent votes in support instead of 51 per cent, as in the case of an ordinary resolution.

The nomination and remuneration committee (NRC), which selects candidates for appointment as independent directors, will be required to have two-thirds IDs, as against the existing requirement of a majority. Further, the NRC will have to disclose and justify the skill-sets while selecting a candidate.

Key managerial personnel and their relatives or employees of the promoter group will have to observe a three-year cooling-off period before they get appointed as an independent director.