Patents and Trademarks in India 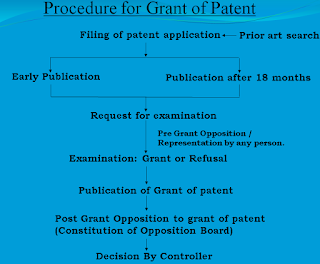 What is the patent granting procedure in India?


Publication of Patent Application in India:

Once the application for patent is filed, it is published 18 months after the date of filing or the date of priority, (whichever is earlier). But for the right to initiate infringement proceedings, the Indian Patent Act provides similar rights to the applicant on and from the date of publication of application, as that provided to the Patentee.

Examination of Patent Application in India:

India follows deferred examination system according so the application for patent is not examined unless a request for examination is filed with the Patent Office to initiate examination proceedings.

Grant of Patent Application in India:

When the application for Patent is found in order of grant, the patent is granted as expeditiously as possible with the seal of the Patent Office.The grant of patent is published in the Patent Journal and Letters Patent is issued.

The term of patents in India is twenty years from the date of application or priority date, whichever is earlier.

Annuity fee is payable every year to keep the patent in force.

For more information on Patent Application process and procedure in India please write to us at: info@ssrana.com

-- Generation of IPRs: To stimulate the generation of IPRs.
-- Legal and Legislative Framework: To have strong and effective IPR laws, which balance the interests of rights owners with larger public interest.
-- Administration and Management: To modernize and strengthen service-oriented IPR administration.
-- Commercialization of IPRs: Get value for IPRs through commercialization.
-- Enforcement and Adjudication: To strengthen the enforcement and adjudicatory mechanisms for combating IPR infringements.
-- Human Capital Development: To strengthen and expand human resources, institutions and capacities for teaching, training, research and skill building in IPRs.
-- Apart from this, Jaitley said that by 2017, the window for trademark registration will be brought down to one month.
-- The policy also puts a premium on enhancing access to healthcare, food security and environmental protection.
Regulator
The work done by various ministries and departments will be monitored by the Department of Industrial Policy & Promotion (DIPP), which will be the nodal department to coordinate, guide and oversee implementation and future development of IPRs in India, a notification on PIB said.
Modi promises IPR policy in UK
Prime Minister Narendra Modi assured businessmen in UK in November last year that the IPR policy will be finalised soon. While trying to lure UK businesses to invest into India, Modi had said, "I am personally convinced and want to assure you that India is committed to protect Intellectual Property Rights of all innovators and entrepreneurs. We have taken several initiatives for transparency and online processing in IP administration. A comprehensive National IPR policy is being finalised," he added.
Industry and Commerce Minister Nirmala Sitharaman on IPR Policy


In December last year, Sitharaman had said that the proposed IPR Policy will provide both domestic and foreign investors a stable IPR framework in the country. She added, "an all-encompassing IPR policy will also promote a holistic and conducive ecosystem to catalyse the full potential of intellectual property for India's growth and socio-cultural development while protecting public interest." 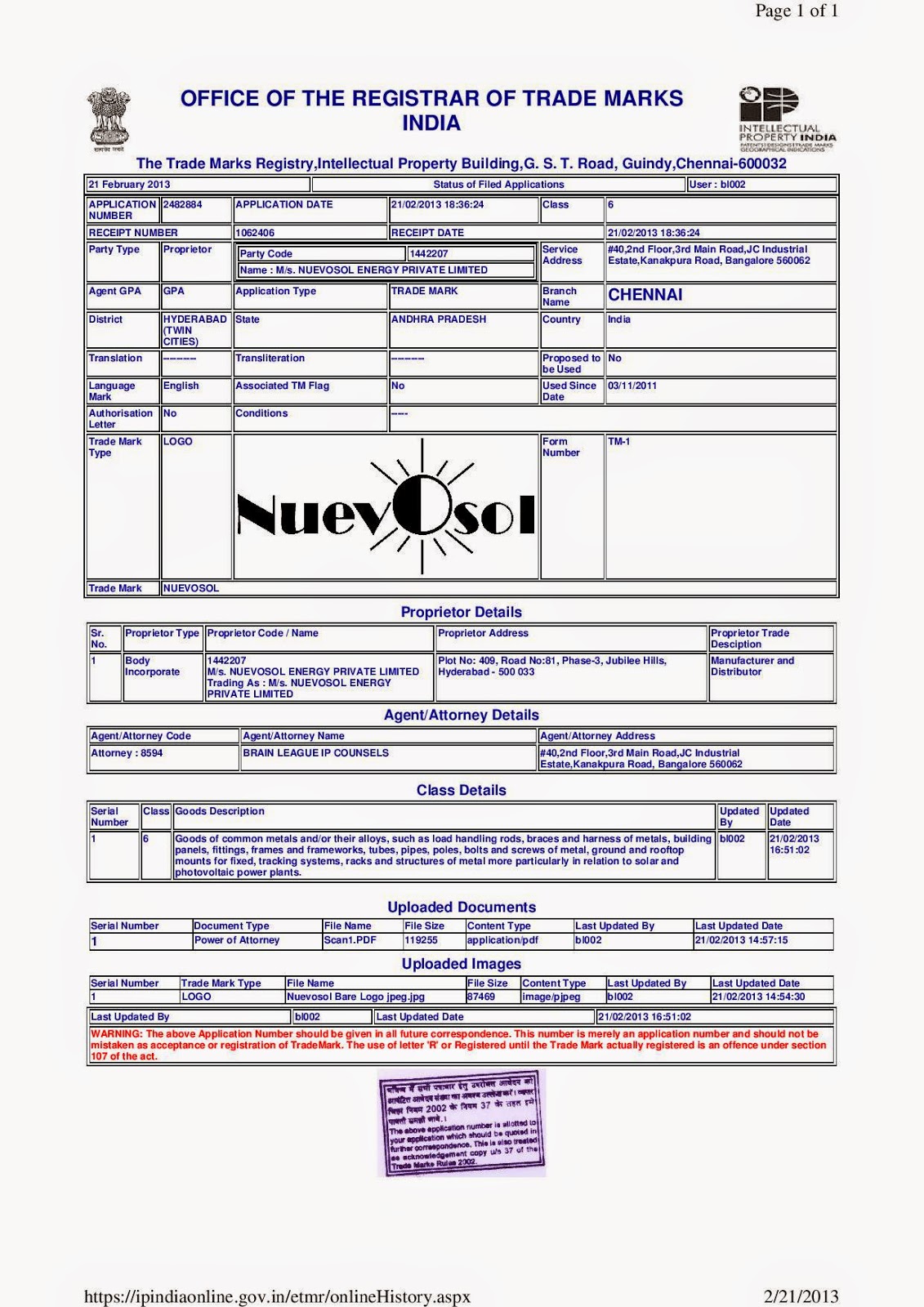 Trademark pangs for brands, popular in some parts of the world and wants pan global presence later


If you have a business or brand sounding anything even remotely close to IKEA, get prepared to face the ire of the Swedish retail giant.The owner of the global chain of furniture and home products stores has asked its legal team to initiate action against over two dozen small businesses across the country that have been selling products and services such as furniture, modular kitchen and packaging material under similar sounding names.The retailer is also in no mood to excuse HR consultancies, spas and event management and advertising firms that are involved in businesses not connected with IKEA's own business.In the name of protection and enforcement of its trademark, goodwill and reputation, the company's lawyers have already sought injunction orders from Indian courts against a dozen such firms to stop them from doing business, and more are in the offing. "In the past 3-4 months, we have become very aggressive in trying to protect IKEA's trademark, a popular brand name globally, in India," said SK Bansal, co-owner of KG Bansal & Company Associates, the law firm representing IKEA.Bansal said injunction orders have already been sought against 15 parties, a mix of small and big companies located in Delhi, Mumbai, Hyderabad, Bangalore and Chandigarh. "Legal actions against a few individuals have also been taken who were trying to register theIKEA or a similar trademark in India," he said.IKEA's move, however, is being seen by many as a vindication of their fear that allowing big foreign retailers into India will wipe out small businesses from the local economy. While some call it bullying, others say it is pure harassment. "If international companies coming to India means that small companies will start losing their business for unjustified reasons, it is unfortunate," said Krishna B Mariyanka, co-founder and director of Akiya Global, a Bangalore-based events and communications company.In a 1,000-page legal notice, IKEA's lawyers have asked the founders of Aikya Global to remove the company's website, registered under the name Aikya, as it is phonetically similar to IKEA."We are totally surprised and zapped with this legal notice and feel that we have been bullied as there is no similarity between what IKEA does and what we do," said Mariyanka, who is preparing a legal response to the notice.Bangalore-based professional staffing company IKYA Human Capital Solutions, which has an annual turnover of Rs 1,500 crore, has been sent a similar notice. "This is harassment and we will counter this legally," said Ajit Issac, founder of the company.Issac holds 30% stake in IKYA Human Capital Solutions while the remaining is owned byThomas Cook Slamming IKEA's claim, Issac said his company's name is derived from Sanskrit, which means "oneness". "Besides, we are not into retail. Where is the question of misusing their brand name," he said. But IKEA's lawyers have a different argument.They say all the Indian companies that have been served with notices or injunction orders have adopted those names deliberately to mislead the public into associating their products and services to those offered by IKEA. "IKEA has its trademark registered in India for over 15 years now and it has 45 registrations for different categories of products and services," said Bansal. Misuse of a popular brand name and trademark such as IKEA can be injurious to its reputation and goodwill, he said.After a year of going back and forth, the government in May finally cleared IKEA's proposal to invest Rs 10,500 crore in India to open 25 IKEA branded stores. The company has held talks with various state governments as it seeks 5-15 acre space next to highways in cities including Noida, Hyderabad, Bangalore and Gurgaon.A host of foreign retailers including Walmart, Starbucks and Carrefour have filed cases against Indian firms using names similar to their brand names or logos.In 2007, Walmart opposed several trademark filings in India including Call-Mart, Mall-Mart, Val-Mart and Hall-Mart. In June, Carrefour won a trademark case against Carrefour House of Interiors after the French retailer dragged the Chennai-based firm to the Madras High Court alleging trademark infringement.Experts point out that for successful global companies, the most important and valuable asset is their brand name. "Even if a company is not present in any category, it would always want to protect itself and the consumer who may be misled into believing that he is buying a product or service of the global company," said Arvind Singhal, chairman of consultancy firm Technopak.

Mondelez International, the new identity of Kraft Foods' snacks and confectionery business, has run into perhaps its hardest hurdle in changing the name of Cadbury India - a brand squatter.
Mondelez India, a Delhi-based company selling Kennyzone brand of confectionery, is waiting to legally challenge the global company from registering a similar name.

"We are seeking legal advice on the matter and will take actions accordingly," said an official spokesperson of Cadbury India, which is treading very carefully in migrating to the new identity in India where Cadbury has massive brand equity. Now, when branding experts all over the world have found the Mondelez name strange and confusing, how come an Indian entrepreneur came up with the same moniker?
Well, Mondelez India Pvt Ltd was registered in September last, well after Kraft decided to split its business and call the snack business Mondelez - a made-up name selected from 1,700 staff suggestions in March - from October 1, 2012.The Delhi firm was earlier called Non Stop Logistics.

One of the directors of Mondelez India said company promoter SK Sharma is seeking legal advise on the matter and would challenge any attempt from the multinational to call itself Mondelez India.
"Maybe they can stick to being Mondelez International. We are open to discussions on the subject but any other means to register themselves will be challenged legally by us," the person said.
On its website Mondelez India states, "We are confident that the quality of Kennyzone candies matches, and in some cases is better than many major renowned international brands."
Anuradha Salhotra, managing partner at Lall, Lahiri & Salhotra, a law firm specialising in intellectual property, said creation of Mondelez India is a deliberate attempt to make a quick buck.
"These are deliberate and planned moves by some people to make a quick buck out of it. Many a times they are more than willing to sell it back to the rightful name owner," she said. "If it is just a domain name then there could be arbitration but if it is a company name, trademark and domain name, then Mondelez International will have to go in for injunction," she added.
Meanwhile, Mondelez International has registered a company, Mondelez Foods, in India although it does not use the 'foods' tag in any other markets.
In early 2010, Kraft Foods acquired British candy maker Cadbury in a deal worth close to $19 billion. And in October last, Kraft's snacks business that includes brands such as Cadbury, Oreo, Tang and Trident was spun off into Mondelez. Kraft is left with the grocery portfolio, which includes Philadelphia cream cheese and Maxwell House coffee.
Mondelez derives some 45% of its sales from developing markets. Its CEO Irene Rosenfeld is reported to have said that the priority in India will be to drive chocolate penetration by increasing marketing support and strengthening distribution.

But the chocolate maker has started 2013 on a rocky note in India with authorities looking into possible tax evasion. Last year, an investigation was launched to determine whether Kraft Foods Inc needed to pay taxes arising from its $19 billion takeover of Cadbury. Another case involves alleged evasion of central excise duty, or factory gate tax at a company facility in Himachal Pradesh.
The name change, from a highly popular one to a name that can be pronounced in several ways, and dealing with a brand squatter too have now become part of the not-so-sweet tasks of Cadbury India.
Kala Vijayraghavan, ET Bureau Feb 23, 2013
Email ThisBlogThis!Share to TwitterShare to FacebookShare to Pinterest
Labels: Corporate Laws
Newer Post Older Post Home